Subscribe to LuxeCommuniqué - your weekly dose of latest luxury news!

Subscribe to LuxeCommuniqué to get the latest updates on the recent trends and developments in the Luxury Industry. 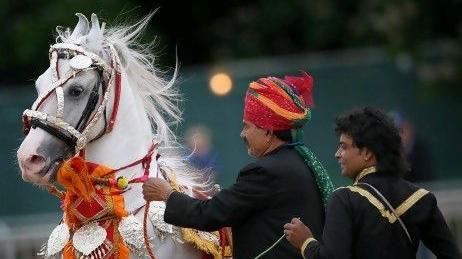 The highly successful Marwari community has a long tryst with royalty, luxury and grandeur in their lifestyle. Yet, the thrifty nature of Marwaris prevented them from indulging or splurging on luxury goods as compared to other ostentatious communities of India. With the changing times and evolution of next generation of Marwaris, meaning of luxury has been redefined and given way to more liberal thinking towards luxury consumption among Marwari luxury buyers. Dr. Sheetal Jain, Founder of Luxe Analytics, a luxury market consulting firm and a Marwari entrepreneur herself, explores this changing facet of luxury among Marwari community. She is an internationally published and quoted luxury professional and one of the pioneers of Indian luxury consumer research in India.

Indian luxury market is mushrooming and among the fastest growing markets in the world. According to an Assocham study, it is estimated to multiply at the rate of 25 percent per annum and reach from the current $18.5 billion to $50 billion by 2020. This sudden growth can be attributed to the changing Indian mindsets and value system, growing brand awareness among the youngsters, multiplying disposable incomes, urbanization and increasing number of middle class population. Marwaris who are considered as the most opulent community in the country, can very well become the flag bearer of the growth of luxury brands in India.

‘Marwari’ refer to baniya or community of skilful traders from all over Rajasthan. The word ‘Rajasthan’ is derived from raja + sthan, meaning place of kings. Rajasthan, till today is considered as a hub of royal families. Jaipur, Mewar, Jodhpur, Bikaner, Udaipur and Jaisalmer are still among the popular royal families of Rajasthan. In addition, for decades affluence and luxury has been embedded in the lives of successful Marwari families. There has been a penchant for luxury jewelry, luxury cars such as Rolls Royce and other symbols of opulence. Therefore, luxury is not new to Marwaris. Marwaris are known for their rich culture and heritage of luxury since the time of maharajas. What is new to Marwaris, however, is the shift to the new forms of luxury.

Erstwhile Marwaris have flourished their businesses by migrating from their homeland Marwar (a region in Rajasthan) to distant locations such as Kolkata, Chennai, Mumbai and other trading hubs in India. Over the years, Marwari business community has developed strong hold over these places. Men migrated to these locations over a long time ago, however, their families joined them later. Today, these bustling Marwari hubs in cities like Kolkata are witnessing radical shift in the predominant Marwari culture, be it be related to lifestyle, education or purchase patterns. Conservatism, key characteristic of a typical Marwari, has paved way to dynamism, innovation and openness. This has led to significant transformation in the luxury consumption behavior of Marwaris. The luxury purchases for the older generation of Marwari families were more value-oriented and restricted to few items like Jewelry and clothing. However, with the changing times and emergence of new generation of millennial Marwaris, affluence is taking a newer dimension. The younger lot is taking the luxury legacy of Marwaris to newer heights with more diversified indulgence. The increased availability and growing exposure to global luxury brands owing to rising overseas travel, social media and changing perceptions about luxury among the Indian consumers have contributed significantly to this new trend among Generation Next of Affluent Marwari families in India.

Marwari Women, then and now

A rich part of Rajasthani cultural heritage is its alluring Jewelry. For years, Marwari women has been embellished with beautiful jewelry from head-to-toe, to name a few, borla, nath, rani haar, bajubandh, bangadi, haathful, tagdi, payal and bichuwa. With their limited education, exposure and knowledge, they saw these jewel pieces as the best option to splurge money. Luxury, for them revolved around possession of expensive jewelry as it was seen as a value investment.  Their world was confined to the boundaries of their household. They had limited aspirations in life. However, the new age Marwari woman has radically transformed. She is independent and confident. She is no more restricted to just her household and kids rather she is making a significant mark in the society. There has been massive change in her lifestyle. Ghagra-odhani, the traditional clothing of Marwari women has become a rare attire, seen only during the weddings of close family members. Borla and ghongat has become passe. New Marwari woman is well- educated, well- travelled and well-versed with the trends across the globe. She has transitioned from saris to shrugs, from pajab to anklets, from customary clothing to designer labels. Her wardrobe is no more packed with only sarees, lehangas and Kundan jewellery. She has become a contemporary women who has the perfect mix of western and traditional outfits. Her closet carries branded apparel, bags, shoes, sunglasses, perfumes, and wide gamut of beauty products. She wisely chooses the best accoutre as per the occasion. She is no more hesitant to purchase a Louis Vuitton bag worth Rs, 1 lakh as she believes in living for the moment and not saving for the rainy day. She lives for the experiential value. She loves to spend money on spa or driving a luxury sedan rather than just buying loads of jewelry. You will be thrilled to know that the first Indian woman owner of one of the world’s most luxurious sports cars, Lamborghini, is a Marwari woman!

Education, then and now

Marwaris have been known for their business acumen, adaptability and success. They are risk takers, great bargainers and venturous. Entrepreneurship is relentlessly encouraged by Marwari community. Education often takes a backseat among Marwaris where it is a long established tradition that sons join their family businesses as soon as they pass out from school. There prevails a strong belief that starting a business will get you more reverence than a college degree. However, in the last few decades this mind-set has radically changed. The younger generation is taking up varied careers like, architecture, hotel management, fashion designing, journalism and teaching. The book, ‘The Marwaris: From Jagat Seth to the Birlas’ also posits that today the young Marwari is going abroad to get the best education at leading international institutions. They are transforming traditional approaches to business and embracing new-age technologies. Millennial Marwaris are receptive, discerning, experimental and willing to explore the world. They are unrestrained towards indulgence in new forms of luxury. They see value in spending on lavish cars, vacations, food and watches.

Extravagance, then and now

Think Marwaris, think money. The Rajasthan-born community has been well defined for the affluence, traditional lifestyle, conservatism and strong focus on “value for money” in their luxury indulgences. They have firm belief in frugal living and saving. They are considered as shrewdest businessmen across the globe. A typical Marwari is known for calculating interest before investing. For years, he has been happily spending huge money on gold jewelry as he see it as an alternative source of investment, but given a choice to spend the same amount on luxury art piece or designer handbag which can also be carried forward as a legacy from one generation to another. A traditional Marwari would never ever give it a thought, for him it is utter waste of money. However, he would not be hesitant to spend hefty amount on lavish wedding as it symbolizes his status in the society. But with times, the mind-set and value system of young Marwaris are evolving. They have no more restrained their luxury spending to just jewelry or weddings.  Rather, they are going beyond to attain individuality, hedonism and self-gratification. They are moving from external to internalization of luxury. They are looking for experiences that help them express who they are.

The Marwaris, aptly called the Jews of India, have transcend over time to illustrate new maturity in their orientation towards consumption of luxury goods and services. New-age Marwaris are depicting similar purchase behavior as evident among youth not only in India but around the world. In nutshell, Millennial Marwai luxury buyer has evolved in pace with the global trends. Today’s Marwari luxury buyers are driven by classic characteristics of luxury such as rarity, quality, craftsmanship, technology and aesthetics. The abode of affluent Marwais are the most lavish, with seamless, exceptional decor. Marwaris have become avid travelers to the most exotic destinations like Iceland, Greece, Finland, etc. We can see today’s Marwaris flaunting various luxury brands from Manish Malhotra to Michael Kors; from Sabhyasachi to Jimmy Choo, from Mercedes to Porsche, to name a few.

Even though Marwari community is not as flamboyant as other communities such as Punjabis, they indeed present a wealth of opportunities to Indian and global luxury brands eyeing growth in the Indian sub-continent. Marwaris have amassed huge amount of wealth over the centuries. It’s the right time for the luxury brands to penetrate deep into this community that has seen the epitome of success in wealth creation.

(This article has also been published in Marwar India magazine on March 15, 2018).